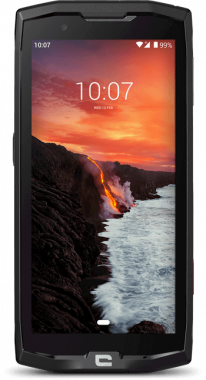 EFFICIENT IN EVERY WAY

In order to offer all its services, the CORE-X4 was inspired by the needs of professionals, far exceeding what you would expect from a simple phone. With its resistance, elegance, working performances and its latest generation camera lens, the CORE-X4 ticks all the boxes.

IT’S GOT THE LOOK

The CORE–X4 on the lookout. Its 48MP FUSION4 photo lens faithfully reproduces the beauty of your most intense experiences with striking quality and clarity. Even in low light, your after work or evening photos remain bright thanks to the 4x4 fusion of pixels, a technology allowing 4 times more light to be absorbed. A perfectionist, it also manages its own electronic noise reduction.

If you’re not one to stop, you can trust CORE-X4. With its optimized battery and power consumption, the CORE-X4 promises long hours of work, leisure and outings, with no interruptions. Its long battery life can be extended by using all the X-LINK charging accessories (recharge your CORE-X4 using the X-DOCK when you’re at the office, with the X-CAR when you’re travelling, with the X-RIDE when you’re on a motorbike or with the X-POWER 6000 mAh power bank wherever you are).

With its programmable buttons, the CORE-X4 does whatever you want it to do. By configuring one of the buttons to a push-to-talk app, you can use your CORE-X4 as a walkie-talkie. For example, professionals working on construction sites or at festivals benefit from perfect coordination between teams. You can also configure the second programmable button to an LWP (Lone Worker Protection) app. In fact, its compatibility with the major LWP solution providers allows lone workers to operate in complete safely, with the option of instantly signalling a problem.

The CORE-X4 also guarantees safety in every moment of your daily life: your payments are fast and secured with the NFC function; even the unlocking is made easy thanks to the fingerprint scanner button, with the option to configure 5 fingerprints. The CORE-X4 also offers a QR code reader, integrated directly into the camera function, to scan QR codes instantly and at any time.

Internal components are one thing, external resistance is quite another. CORE-X4 has not forgotten this. Whether it is dropped in the mud or a glass spills on it in the kitchen, CORE-X4 resists and takes it in its stride. The battery of tests to which it has been submitted has been formalized by the “Crosscall standards” and counts no fewer than 100 resistance tests.

FROM A TOOL TO A PERSONAL PHONE

The versatility and performance of the CORE-X4 extends beyond professional needs, into your personal life. Its robustness, proven in the field, will also be appreciated on the beach, by the pool or in the mountains. The Wet touch and Glove touch functions, popular at work, are just as useful in your private life, when your hands are wet or when you’re wearing gloves.